Skip to content Skip to left sidebar Skip to footer

Although Ightham was not mentioned in the Doomsday Book of 1086, it seems to have been in existence long before then. 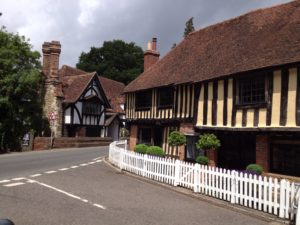 It is generally accepted that the name Ightham dates from the earliest Anglo-Saxon period, and was originally Ehtaham; derived from ‘Ehta’ a Jutish personal name and ‘Ham’ – settlement. The neighbouring hamlet of Ivy Hatch probably dates from the same period, since its name is derived from the Anglo-Saxon Heuvy Hatch meaning ‘High Gate’.

Even earlier than the Anglo-Saxons there was a large Iron Age Hill Fort on Oldbury Hill. This is now National Trust property and lies inside the parish just outside the village.

Early in the 6th century the population was small with a settlement by the Busty (Shode) stream.

The church was originally built in the 12th century and stands on a splendid site overlooking the village. It is visible from the Ightham By-pass. It is a typical mediaeval parish church and was reconstructed early in the 15th century.

During the last war many bombs fell in the parish, but the church was not hit; however, it did lose much of its glass. The east window was replaced in 1949 and a plaque records that it was erected in memory of parishioners who lost their lives in the two World Wars.

In 1315, King Edward II, at the request of the Lord of the Manor, granted a licence for a fair to be held annually in the village for three days. This was called the Coxcombe Fair. The fair was revived in 1977 for the Queen’s Silver Jubilee and since then fairs have been held in 1988 to commemorate the defeat in 1588 of the

Spanish Armada, and in 2002 for the Queen’s Golden Jubilee and in 2012 for the Diamond Jubilee.

The three great houses of Ightham were Ightham Court, Ightham Mote and St Clere, the latter now in the parish of Kemsing. Ightham Court was the home of the James family for many years. 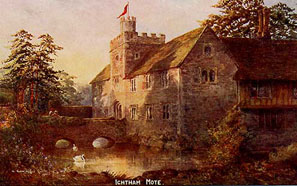 Ightham Mote was first lived in by Sir Thomas Cawne from 1340 until his death in 1374 and the Great Hall dates from this period. Thereafter, it passed through various owners until it was bought in 1591 by Sir William Selby whose family lived there, for the next three hundred years. In 1953 the Mote was bought by an American, Henry Robinson, from Portland, Maine, who had first been attracted to it while on a cycle tour as a young man. He died in 1985, having bequeathed the Mote to the National Trust.

The centre of the village is very picturesque with its half timbered houses and does not seem to have changed much over the years when a comparison is made with old photographs. The village is well cared for and there are three public houses, The George and Dragon, The Plough at Ivy Hatch and The Harrow. We also have a fully stocked farm shop.

An interesting monument in the church is to Dame Dorothy Selby who was a great needle-woman. She worked many pictures, one of which depicted the Gunpowder Plot. There is a legend that she took part in the discovery of the Plot, but this is the result of a misinterpretation of the words on the memorial, which reads in part “whose art disclosed that Plot”. The real meaning of the words is no more than that she displayed the Plot in her needlework.

During the Civil War the Rector of Ightham, the Reverend John Gryme, achieved notoriety by causing a Royalist rebellion. Parliament issued an Ordinance requiring all clergy to take an oath of allegiance and to impose it on their parishioners. Mr Gryme, well knowing the sympathies of the parishioners refused to obey. A troop of horse was sent to arrest him. A melee ensued in which a member of the parish was killed. The action sparked off a rising throughout the district, which took parliamentary troops to quell.

Two VCs have been awarded to Ightham men. The first was Williarn Sutton, a bugler with the Royal Green Jackets who won his in 1857. The second was Riversdale Colyer-Ferguson of Ightham Mote whose award was made posthumously in 1917.

Cob nuts were first cultivated in quantity in Ightham by Mr. James Usherwood who lived at Cobtree Cottage, next to the forge in Sevenoaks Road opposite Jubilee Crescent. A shop at the south end of Oldbury Lane became a public house early in the 1800s and adopted the name Cob Tree Inn.

One of the great village characters was Benjamin Harrison, who lived from 1837 to 1921. He was a grocer by trade, but an archaeologist by inclination. He won international recognition as a pioneer in the subject. He found flints in the pre-glacial drift on the North Downs near Ash, which he contended were artefacts, thus vastly antedating the antiquity of man.

Ightham has suffered its quota of tragedy. In 1908 Major-General Luard found his wife dead with bullet wounds in her head, in a wood not far from their house. The police could find no clues to the identity of the murderer. Gossip brought suspicion on the General himself, accompanied by venomous, anonymous letters. The strain proved too great for him and he committed suicide by throwing himself under a train.