St Peter’s Church runs services throughout the week for the local community.

The church overlooks the group of ancient buildings at the centre of the village. It is recorded in the early 12th century and it was probably preceded by a Saxon building. Early Norman features survive – 2 little blocked windows high in the east wall and remarkably thick chancel walls. The present church was almost entirely rebuilt at the turn of the 14 – 15th centuries, and so it has remained, apart from the north aisle which was rebuilt in typical mellowed brick in 1639. The first Rector was presented to the benefice by Henry III in 1232.

All are Common Worship except where indicated as BCP.

Holy Communion 10.00am (every Wednesday)

A warm welcome is extended to everyone at all services. The church has wheelchair and pram access, and a Loop System to assist those with hearing aids. Families are particularly welcome at all services. For young children books and toys are available in the North Aisle. There are modern lavatory facilities. Coffee is served after the morning service.

The Choir welcomes new singers of all ages. If you enjoy singing please do consider joining the choir. Contact Carol Kennedy (tel:01732 884764).

BELLRINGERS – Our team of ringers is always in need of experienced recruits and willing beginners. Contact Richard Abnett (tel: 01732 810492).

SUPPORT is offered via many registered charities, both local and not so local. Active participation in Christian Aid week is an annual feature. An increment of our income is given annually to various partner societies that the donations committee considers most appropriate for the church to support.

SAFEGUARDING – St Peter’s Church is committed to creating a safe church for all. We have adopted the Bishop’s ‘Promoting a Safer Church’ safeguarding Policy Statement for Children, Young People and Adults which can be viewed on the Diocese of Rochester’s website.
Our Safeguarding Officer is Finley Lawson. If you have a concern about safeguarding, please contact Finn on 07796 783013‬ or email safeguarding@ighthamchurch.org.uk; or you are also welcome to talk through any concerns with the Revd Tim Hatwell (details below). In an emergency please contact the police on 999.

Coffee Shop – A weekly opportunity to enjoy tea, coffee, cake and good company. Held every Wednesday from 10.15am to 11.45am in the Church Centre. 50% of the proceeds are donated to charity.

Ightham Primary School is closely linked with St Peter’s. A group of people regularly attend the school to present a session of Open the Book (a dramatized reading of a Bible story) to a whole school assembly. The children attend occasional services in St Peter’s Church.

(for accessibility purposes, text is repeated below)

As Christmas is a time for giving please give generously, if you can, to our seasonal charities who are in especially great need of your support in 2020.

The Children’s Society – Give online

St. Mungo Charity for the Homeless

‘Carols on the Rec’ (Monday 21 December)

If you are unable to join us at St Peter’s for our season services and have someone dear to you who you would like to be remembered in prayer this Christmas, please contact the Rector, Tim Hatwell on rector@ighthamchurch.org.uk

The church of St Peter’s Ightham overlooks the group of ancient buildings at the centre of the village. It is recorded in the early 12th century and it was probably preceded by a Saxon building. Early Norman features survive – 2 little blocked windows high in the east wall and remarkably thick chancel walls. The present church was almost entirely rebuilt at the turn of the 14 – 15th centuries, and so it has remained, apart from the north aisle which was rebuilt in typical mellowed brick in 1639. The first Rector was presented to the benefice by Henry III in 1232.

There are various features of interest in this treasured church:

The heavy oak entrance door with locally wrought nails and fittings was put in place in 1552.

The Cawne monument, in the north side of the chancel, dated about 1374. Sir Thomas built the great hall in Ightham Mote. He is exquisitely carved in full armour, bascinet with attached mail, the knightly belt and gauntlets. It is contemporary with a similar tomb of the Black Prince in Canterbury Cathedral. It may be that both were carved by the same sculptor. The window above – the oldest in the church – was willed by Sir Thomas. 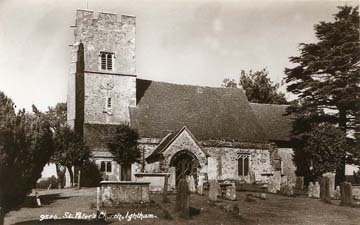 Lady Dorothy Selby monument (1741), alongside the east window. The bust at least in this important sculpture was carved by the Master Mason to the Crown. Another occupant of Ightham Mote, her various interests -music, books, needlework, flowers and, being childless, the poor children of the Parish – are depicted around her.

On the south wall of the chancel a monument to two more Selbys, both Sir William’s. The lower figure never married (1611), the upper, his nephew, was married to Lady Dorothy (1638). They combine to offer another large memorial in the ornate Stuart fashion.

Beneath a carpet, the brass of Jane Dirkin (1626) in typical Jacobean costume and a small brass on the floor in front of the altar of Sir Richard Clement with some original enamel still in place. He provided the chapel in Ightham Mote.

Hatchments. St Peter’s has twelve – only 4 churches in Kent have more. They represent the three senior houses in the Parish – Ightham Mote, Ightham Court and St Clare (now in the Parish of Kemsing): and three hatchments from Rectors.

A set of Jacobean box pews from the James family of Ightham Court. Rich carving includes the family crest- a chevron with three mill-rinds (the iron centre of the mill wheel for grinding barley): brewing was the principal source of the James’ wealth.

In the west wall of the south aisle, the mutilated gravestone of Jane Lambarde, first wife of William Lambarde, eminent Elizabethian lawyer and antiquarian. She lived at St Clare, married at 17 and died of smallpox 3 years later.

In the churchyard, adjacent to the chancel, an elaborate Victorian tomb for the Bailey Family. It was designed by the Victoran gothic revivalist architect William Burges. 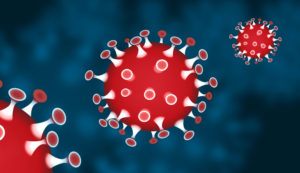